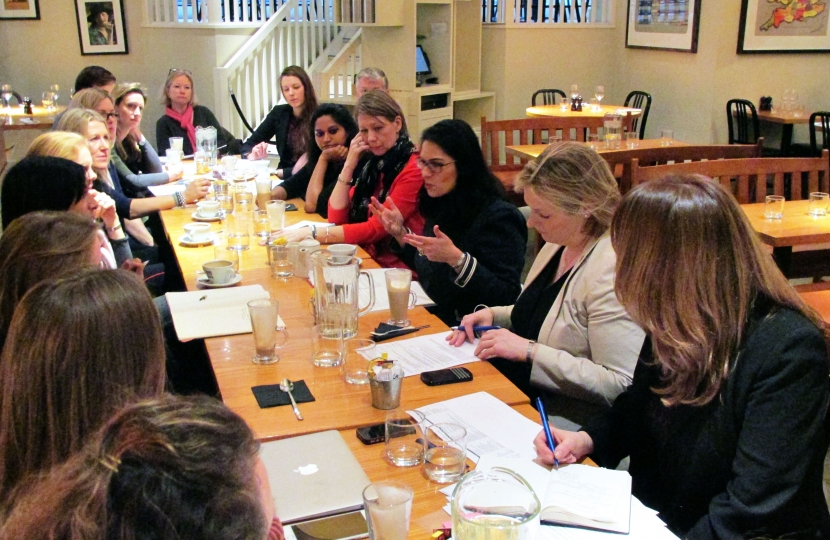 Ms Patel was keen to get the views of those attending on what barriers still exist that prevent mums from returning to the workplace and what further policies could help them.

The cost of childcare was one of the ongoing barriers raised and many felt that existing regulation for childcare makes it difficult to take advantage of different childcare options like au pairs and childminders. Ms Patel described the ‘ground-breaking’ scheme that will provide up to £2,000 tax-free childcare from Autumn 2015, something that was welcomed by the group.

Other themes discussed included the value that having the right mentor brings, the importance of networking and the need to encourage more employers to offer skilled part-time jobs to encourage women back into the workforce after having children.

“The number of women setting up their own businesses has doubled in the last six years. It was inspiring to hear the stories of local mums. Many have overcome significant hurdles in their desire to set up their own business, whilst managing the challenges of looking after children at the same time. These women are making a major contribution to our economy and I want to share their success stories and help encourage other women to follow in their footsteps.”

“I would like to thank all the women who came along to share their inspiring stories. This Government has shown its support for working women by bringing in policies to reduce the cost of childcare and help women that want to start their own business. Our long term economic plan has helped to get more women working than ever before but I would like to go further to remove any remaining barriers that prevent women from re-joining the workforce after they start a family.

“Mary is a fantastic local MP and a great champion of women entrepreneurs. I know that she has worked hard to support local women to set up their own businesses, including by running advice and guidance seminars.”

Following the roundtable discussion, Ms Patel also accompanied Mary to visit The Barley Mow Centre where she met female entrepreneurs from Wonderland Events. She also met the team at PitchUp.com, the award-winning Chiswick-based online camping website. Dan Yates from PitchUp.com explained the importance of working mums to their business, as many of their staff work during school hours using technology in their own homes.