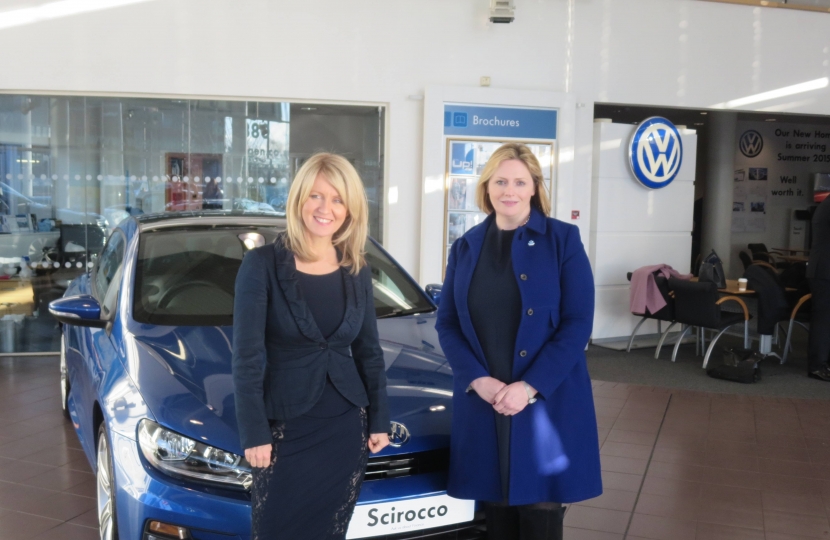 This week, the Employment Minister, Rt Hon. Esther McVey MP, accompanied local MP Mary Macleod on a visit to VW West London to discuss progress on the opening of their new flagship showroom in Chiswick.

Following the launch of the new 2015 number plate at the beginning of March, the showroom was a little emptier than usual as cars were heading out the door faster than new ones could come in to replace them.

Ms McVey and Mary met VW West London Manager Mark Crook who showed them the detailed plans for their new £45 million showroom – which will be the largest in Europe and will employ around 85 people.

“Clearly with car sales at their highest since 2007, business prospects for VW West London look good. The new showroom is a huge investment and a massive vote of confidence in West London. It sounds like there will be some fantastic job opportunities coming up for local residents to join their team in Chiswick”.

Mary also invited Sue Andrews and Tony Hylard from Jobcentre Plus to the meeting to help build links and ensure that local residents are well informed about new job opportunities.

“I would like to thank VW West London for giving us an update on their exciting new showroom. Like many other local companies, expansion in this area is a top priority for them.

“There are less than 300 young people in my constituency looking for work but VW West London welcomes applications from older workers too. I would also like to commend them for the work they are doing to work with charities like Action on Disability to actively recruit people with learning difficulties”.